We examined all adult patients registered for liver transplantation between 2016 – 2020 and excluded patients receiving MELD exceptions or those receiving dual organ transplantation. Using K-Means Clustering Analysis (method to assign primary driver) we classified each patient as either MELD-Br, MELD-INR or MELD-Cr depending on the dominant variable for a given MELD score (Fig A). The primary outcome of interest was intent-to-treat survival defined as survival within 1 year from listing with or without liver transplantation (accounts for waitlist and post-transplant outcomes). AKI and CKD were defined using ADQI and KDIGO criteria, respectively

Not all MELD scores are created equal. For equivalent listing practices, registrants with MELD scores driven by serum creatinine have lower ITT survival and this may be partly explained by changes in kidney function in waitlisted registrants. If continuous distribution is adopted for organ allocation, MELD subtype may serve as (1) a useful variable for assessment of risk of mortality and (2) allow for data driven assignment of additional priority especially among females. 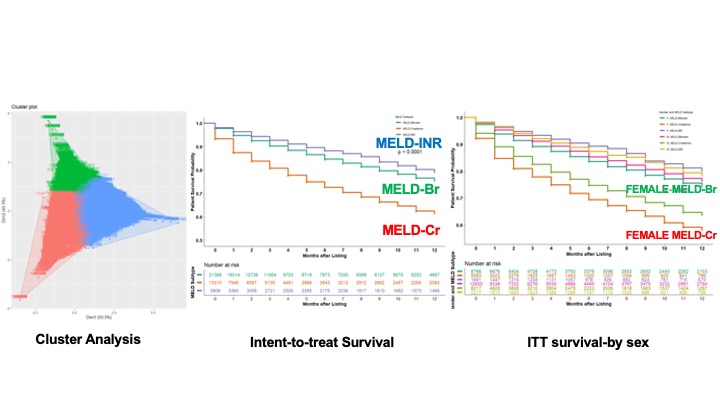