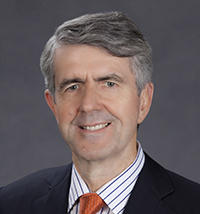 He has previously served on the Board of the American Society of Transplant and was Chair for Gastroenterology at the American Board of Internal Medicine. He served as Co-Chair on the KDIGO Guideline on management of HCV in chronic kidney disease. His involvement with AASLD has included editorship of Liver Transplantation as well serving on the Publications and Practice Guideline Committees.

Disclosures of Potential Conflicts of Interest
He has served as a consultant to AbbVie, Gilead, Merck and Mallinckrodt.