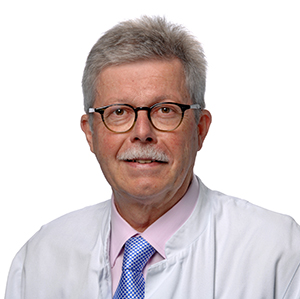 Hepatology appealed to Alexander L. Gerbes, MD because it is a specialty that encompasses “a broad spectrum of relevant diseases and the development of novel treatment options,” he says.

"Education determines the quality of medicine in the future. And the interaction with younger colleagues is often challenging and always rewarding."

Treating a patient with liver disease early in his training inspired him to explore the field. Looking back, it was the “care of a patient with unclear etiology of ascites in my second year as an intern which prompted my first clinical studies and papers on differential diagnosis of ascites,” he says. While attending the University of Munich Medical School, he traveled to the United States to complete an internship at the University of California, San Francisco Medical Center’s Moffitt Hospital, now Moffitt-Long Hospital in 1979. He completed a second internship at the Royal Hallamshire Hospital in Sheffield, the United Kingdom in 1981. Prof. Gerbes graduated magna cum laude from medical school in 1982. He now serves as the Vice Chief in the Department of Medicine II at the Klinikum der Ludwig-Maximilians-University (LMU) of Munich in Germany.

Early on in his career, several influential mentors inspired Prof. Gerbes and helped guide his career as a hepatology researcher.

“I was fortunate to train with several very dedicated clinical teachers, such as Tilman Sauerbruch and Gustav Paumgartner, who was an outstanding mentor guiding me toward a scientific, hypothesis-driven approach,” he says. “He taught me to always strive for clarity and precision in medicine and in science.”

His body of research includes studies on hepatocellular carcinoma, cirrhosis, and other potentially life-threatening liver diseases. He describes why these challenging, complex conditions appealed to him as a scientist and a doctor.

“During most of my research, I was fascinated by a translational approach, investigating parameters, methods and tools with potential benefits for our patients. This may explain why I focused on these diseases, which still represent major challenges,” he says. His current and future focus includes researching drug-induced liver injury (DILI), which is “still a major cause of severe, acute liver injury. In particular, the idiosyncratic type, although rare, can lead to death or the need for a liver transplant. Diagnosis is done by exclusion of other well-defined causes and by expert adjudication. However, many patients regularly take several drugs, and often, it is impossible to determine the culprit. Because of this, all medication in these subjects regularly are discontinued, putting the patient at additional risks.”

DILI also is a frequent cause of attrition of innovative compounds in drug development, and of restrictions or postmarketing withdrawal of the drugs, he says. More accurate tests could help overcome these barriers.

“My group has developed an in vitro test using the white blood cells of individual patients with suspicion of DILI which are transformed into hepatocyte-like cells reflecting the patient’s individual drug intolerance,” says Prof. Gerbes. “This test can diagnose and exclude DILI with good accuracy, and identify the culprit drug in polymedicated individuals. We now focus on using this novel tool as the basis to enable the development of DILI biomarkers.”

When he isn’t working, he enjoys exploring the beauty of nature outside the walls of a laboratory or clinic and spending time with his family. He is married and has one child. He is fond of jazz music and classic cars.

Prof. Gerbes has been a member of AASLD since 1987 and was named a Fellow in 2014. He is also a Fellow of the American Gastroenterological Association and of the European Board of Gastroenterology. He has served as the Associate Editor and Deputy Editor of GUT. Most recently, he was elected President 2018 at the annual meeting of the Society for Gastroenterology in Bavaria (GfGB) in Garmisch-Partenkirchen. He believes that involvement in the AASLD and other medical societies that support research and medical education are important and personally fulfilling.

“Being an active member of these societies is almost like being part of a big family with similar interests and values. The annual meetings are like family gatherings, and are an ideal opportunity to meet with colleagues who have become friends for a long time,” he says. “Education determines the quality of medicine in the future. And the interaction with younger colleagues is often challenging and always rewarding.”

He urges young hepatologists and gastroenterologists now in training to find challenging research topics that personally interest them, regardless of their commercial aspects.

Prof. Gerbes advises trainees to “Hang on, and when doing clinical research, never forget the individual patient’s problems that you are caring for.”